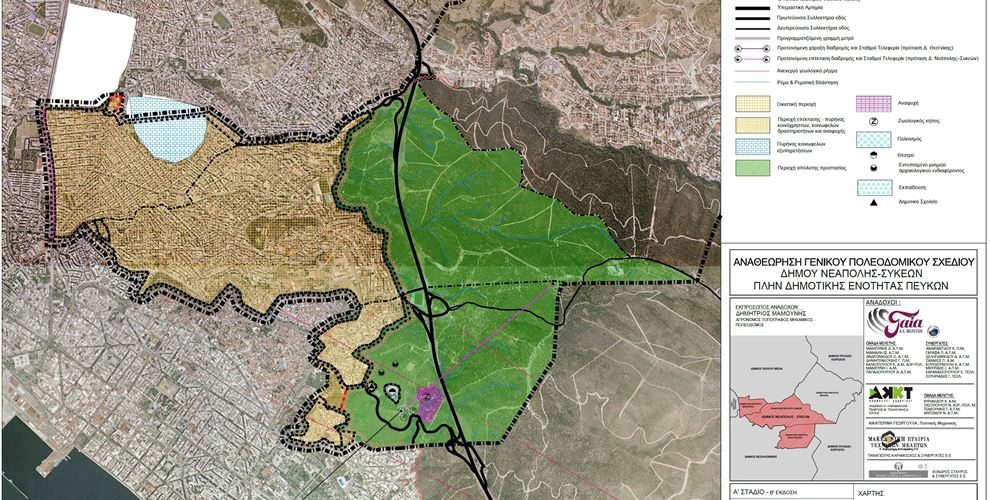 Area: Municipality of Neapoli – Sykies except the Municipal Unit of Pefka, Regional Unit of Thessaloniki

Study Category: City Planning (01) – Town Planning (02) – Geological (20) – Environmental (27)
The Study concerns the revision of the General Urban Plan of the Municipality of Neapoli – Sykies other than the Municipal Unit of Pefka.

Completed the Stage A of the Revision Study of the General Urban Plan of the Municipality of Neapoli – Sykies except the Municipal Unit of Pefka and the parallel developed Geological Suitability Study.

The Structure Plans and the General Urban Plans are being developed in two Stages, A and B. Stage B consists of two substations, B1 – the final proposal of the Study submitted to the bodies for opinion and B2 – a definitive proposal of the study after the consultations.

For the present study, the Stage A was completed on 5-9-2014, which concerns the analysis of the current situation, data evaluation and diagnosis of problems and development of potential and prospects, as well as the development of scenarios and the formulation of the preliminary proposal proposes basic land use zones for the territorial territory of the Municipality. For the Stage A of study the approval and receipt by the Board of Directors of the the Municipality of Neapoli- Sykies are expected.

After the approval of the Stage A, a development order will be given for the B1 Stage of the General Urban Plan and the accompanying studies (Geological Suitability Study and Strategic Environmental Impact Study). The Stage B1, which is a an important aspect for the Study, after its completion, it will be sent to the bodies for opinion, while the accompanying studies will be sent to the Ministry of Environment and Energy to follow the consultation and authorization procedures.